From 1927 to 1967, the building served as the home of the Times-News, during which its longtime editor Joe Boyle started the nickel-a-week campaign that ultimately brought Jim Thorpe’s body and name to the towns of Mauch Chunk and East Mauch Chunk. 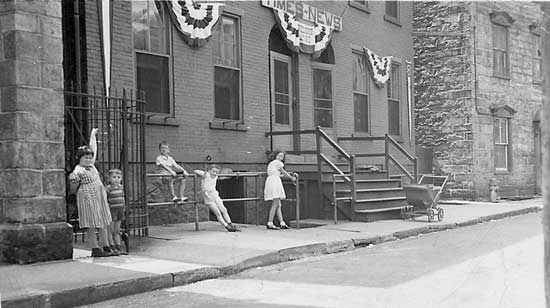 This classic photo shows Anne Genshart (far right) and other children playing outside the old Times-News building at 23/25 Race Street during Old Home Week in the Mauch Chunks, celebrated from July 27 through August 2, 1947. Anne, the daughter of Gertrude Apfelbaum and granddaughter of Times-News founder James J. Boyle, was kind enough to share some history and photos with us.

In October 2009, we opened our first Times House Bed and Breakfast suite on the most romantic street in the Pocono Mountains. Since then we’ve been privileged to welcome guests from all over the country and around the world, who have allowed us to play a part in their vacations and special celebrations.